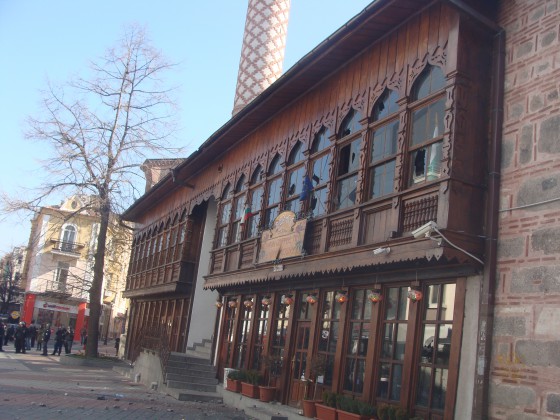 The first four people involved in a February 14 2014 mob attack on the historic Dzhumaya mosque in Plovdiv have been penalised under a fast-track procedure. Two were each fined 400 leva (about 200 euro), one was fined 300 leva and another was sentenced to two days’ detention.

A further four of the 120 arrested during the melee in Bulgaria’s second city on February 14 were to be penalised on February 17, local media said. By February 15, just 10 of the 120 initially arrested were still in custody, prosecutors said. Of those penalised, none was from Plovdiv. They were from Sofia, Varna, Vratsa and the town of Kozloduy. Police worked overtime at the weekend on preparing cases against those accused, according to the Interior Ministry.

The conduct of the police in Plovdiv during the incident, which saw not only the mosque targeted with paving stones, fireworks and bottles, but also the crowd of about 3000 march on the Turkish consulate and the city headquarters of the Movement for Rights and Freedoms, has come in for criticism. Centre-right GERB opposition leader Boiko Borissov alleged on February 16 that police deliberately had been pulled back to allow the attack on the Dzhumaya mosque.

Borissov earlier hit back at criticism of Plovdiv mayor Ivan Totev, a senior GERB member, by Interior Ministry chief secretary Svetozar Lazarov, who said that Totev had been too tardy in responding to ministry requests to ban the march.

An article on local website Plovdiv24 also called into question police conduct during the protest. The article alleged that police had been slow to react when the mosque came under attack, and allegedly had been passive when the crowd moved on towards the Turkish consulate.

When the crowd moved towards the consulate, “instead of moving in a cordon around the protesters, the police walked along the main street, talking to each other quietly, as if they were guarding the protest and were taking a rest”. Police had acted only to defend the MRF headquarters and a Lafka kiosk, the latter a company said to be linked to the family of MRF MP Delyan Peevski, according to the article, which claimed that the protest had been aggravated by provocateurs “to serve the interests of the government and especially the MRF”.

The MRF, in a statement on February 15, strongly condemned the events in Plovdiv, asking what “dark forces” were behind the incidents that, the party said, were clearly intended at bringing down the current government by stoking ethnic conflict.

On February 17, Interior Ministry chief secretary Lazarov insisted that the ministry would not tolerate “any xenophobic and racist manifestations”. He was commenting on the events on Plovdiv. These had been followed on February 15 by the far-right “Lukov March” in Sofia in which, the ministry said at the time, there were people involved who were identified as having been present in Plovdiv during the events of the previous day. These were among 10 people arrested during the “Lukov March”, which proceeded with a police escort in spite of a belated order by Sofia mayor Yordanka Fandukova to ban it. The order from Fandukova came through after the march was already underway.

Lazarov said that currently, there were attempts to “violate the balance of the ethnic model”. These attempts were a threat to Bulgaria’s national security, he said. “There is a pre-court proceeding in Plovdiv over preaching ethnic hatred. I recommend keeping an eye on which persons will be summoned for interrogation and I hope that this will be made public,” Lazarov said.

Meanwhile, by February 15 additional security had been placed around the Dzhumaya mosque, the Turkish consulate and the MRF office in Plovdiv, local media said.

* The Dzhumaya Mosque is believed to date from the time of the reign of Sultan Murad I in the second half of the 14th century CE. It was extensively restored between 2006 and 2008. Recently, a coffee shop offering delicacies imported from Turkey opened on the ground floor of the building, in the place of a former Turkish sweet shop. Restoration of the mosque took place in the framework of a bilateral Bulgarian-Turkish deal which also enabled restoration work on the Bulgarian St Stefan church – known as the “Iron Church” – in Istanbul.