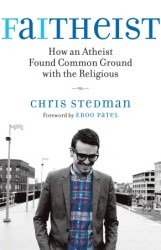 Chris Stedman, author of the forthcoming book Faitheist: How an Atheist Found Common Ground with the Religious, notes that “there are worrying indicators that public figures in the atheist movement are perpetuating and enabling a hostile stance toward Muslims – in many cases, above and beyond the criticisms they direct at other religious communities”.

He also criticises the failure of many of his fellow atheists to speak out when ethno-religious minorities are targeted, adding: “silence about the recent spike in bias and violence directed at Muslims, Sikhs, Arabs, and others isn’t a problem exclusive to the atheist community, but by neglecting to tackle it, the atheist movement is opting out of an important conversation about the mistreatment of certain minority groups in the United States”.

Stedman writes: “As a minority community in America’s religious milieu, it makes strategic sense for atheists to ally with Muslims, Sikhs, and others. But as a Humanist atheist, I feel a sense of moral obligation to stand up against identity-based hatred, no matter whom it’s directed at. Not only is it absurd to hope that people should care about the lack of acceptance for atheists in the United States without also hoping that society will similarly embrace other communities, it’s also selfish. Atheists who remain silent about Islamophobia aren’t just missing out on a strategic opportunity to highlight the parallels between their own experiences and those of other disenfranchised religious minorities – they’re opting out of an opportunity to do what is right, to take the moral high road, and todemonstrate what we keep telling the rest of the world: that atheists can be ‘good without God’.”