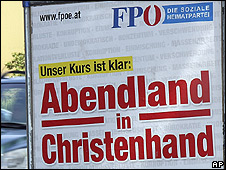 A Church leader has added his voice to criticism of the campaign tactics of the far-right Austrian Freedom Party.

The Archbishop of Vienna, Cardinal Christoph Schoenborn, spoke out in a sermon on Thursday, warning politicians against exploiting Christian symbols.

He did not name the Austrian Freedom Party (FPOe), but it is using the slogan “The West in Christian hands” in its European election campaign. The FPOe’s leader held up a cross at a rally against a Muslim centre recently.

In his Ascension Day sermon, Cardinal Schoenborn said the Cross “must not be misused as a fighting symbol against other religions”. He said the Cross was “a sign of love, which does not answer violence with violence, or hate with hate, but conquers hatred and hostility through devotion and forgiveness”.