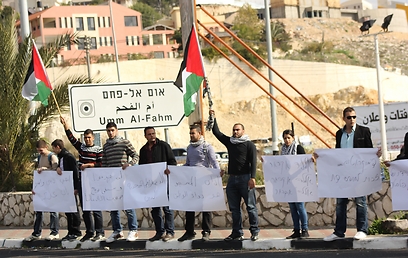 Hundreds of Arabs across Israel took to the streets Saturday to rally against attacks on mosques and the so-called ‘mosque bill,’ which aims to prohibit mosques from sounding public calls for prayer.

The protesters carried signs reading: “We won’t agree to silence the Muezzin”, “A democratic state doesn’t attack freedom of religion” and “Transfer state.” Demonstrators also chanted against the torching of mosques in Jerusalem and in the West Bank.

One protester from Rahat, Jumah Zabarka, told Ynet: “The State of Israel didn’t prosecute those responsible for the ‘Price Tag’ operations. Torching mosques is an act of chutspa because it hurts the Arab residents in Israel and the Arab population across the world.”

He added that the reaction to the mosque torching was insignificant compared to the reactions after the settler attack on Colonel Ran Kahane at the Ephraim Brigade’s base in the West Bank. “The entire country spoke up and the prime minister harshly condemned the dangers. But if somebody hurts us – they’d rather not discuss it,” he said.

While discussing the ‘mosque bill’ Zabarka explained this is a very sensitive issue. “They want to humiliate us at any price. We’re sending out a message to the State that we’re not going to allow for a ‘second Nakba.'”

Knesset Member Jamal Zahalka (Balad) spoke blatantly about the issue at hand: “The torching of the mosques and the ‘mosque bill’ are part of a war declared against the Arab and Muslim population by the racists and settlers. The sound of the Muezzin, the church bells and the blowing of the shofar have always existed.”