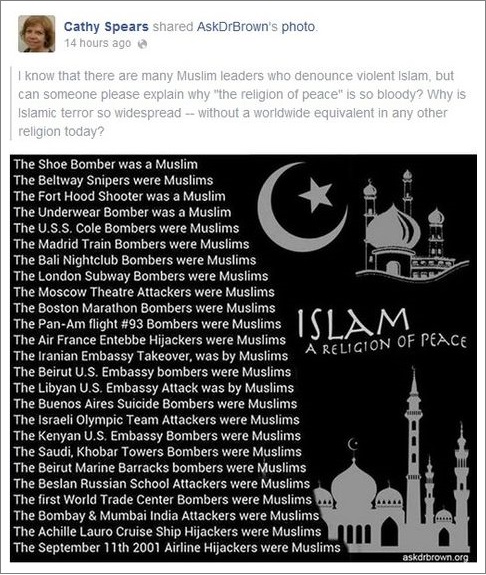 Cathy Spears, a member of the city council, is at the center of the response to two “shared” messages that listed terror attacks perpetrated by Muslims and questioned whether Islamic teachings are peaceful.

Spears, who also serves as an Outagamie County supervisor, said the posts were not intended to offend anyone. “I have a very open viewpoint and look at all kinds of content,” she said. “Posting something doesn’t mean that I approve of it. I’m throwing it out there for comment even if I disagree with it totally. I’m open-minded and see posts from very conservative friends and very liberal friends on Facebook.”

One of the posts listed acts of violence ranging from the Sept. 11, 2001, attacks to the Boston Marathon bombing and other events like “The U.S.S. Cole bombers were Muslims” against the backdrop of mosques. The post originated from the “Ask Dr. Brown” page. Michael L. Brown is a North Carolina-based conservative radio host and American Messianic Jew. Brown did not immediately return a phone call from Post-Crescent Media on Tuesday.

Part of the post included this message from Brown: “I know that there are many Muslim leaders who denounce violent Islam, but can someone please explain why “the religion of peace” is so bloody? Why is Islamic terror so widespread — without a worldwide equivalent in any other religion today?”

Spears says her Facebook page is also home to lighthearted posts from various sources, including religious, political and buzz-worthy.

The two posts in question drew the attention of Leah Hart-Landsberg, an associate minister at the Fox Valley Unitarian Universalist Fellowship. Hart-Landsberg flagged the posts to the council and Mayor Tim Hanna in an email. She said they send a signal that Appleton is a “hostile and unwelcoming community.”

She told Post-Crescent Media that Spears should be held to a higher standard as a public official and called the posts “staggeringly ignorant.” “This is publicly available on Facebook and she chose to forward it on. To me, it’s like a press release from her. She’s inviting us to view, comment and sponsor the message.”

Hart-Landsberg said the posts should serve as an opportunity for reflection and education.

Hanna reacted swiftly to the posts on Tuesday, saying they had no place in Appleton, where officials have put an emphasis on inclusion in recent years.

Hanna said the city does not provide guidelines about political or personal speech on social media for public officials, but that Spears needs to take responsibility for the posts as a representative. “They’re her posts and hers alone,” Hanna said. “It certainly doesn’t reflect the views of the city or the council. I’m disappointed given the context of all we’ve done to position ourselves as welcoming and inclusive.”

Hanna said pointing out violence by Muslims is unfair because terrorist acts have been carried out in the name of other religious beliefs over the course of history. He said although Spears didn’t author the content, the “share” was an endorsement by default. “We’ve gone down this path as a society over and over again and at some point we need to completely learn that we have a Muslim community here, they’re peaceful and good people.”

Kathy Flores, the city’s diversity coordinator, said she expected a community discussion about the Facebook posts. She said the message should be about inclusion. “When things like this get disseminated, we have to come out strongly with a message of interfaith dialogue, education and understanding,” Flores said. “I hope (Spears) is a little surprised at the feedback, and then she takes some time to look reflectively at any uproar it causes.”

Imam Mohamed Abdelazim of the Islamic Center of Wisconsin, which falls in Spears’ district, said the posts were out of character for the community.

“I’ve lived in Appleton for 12 years now and was surprised to hear about this. The atmosphere toward Islam is very peaceful and people have been very friendly,” Abdelazim said. “The solution for any problem or misunderstanding is discussion and education, and the best thing is to correct this information, sit together and have a discussion.”