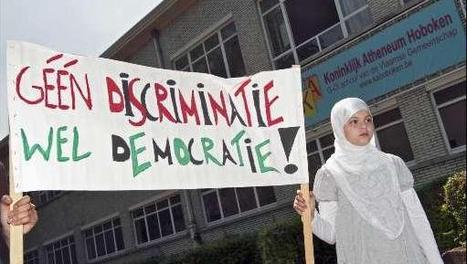 On Sunday about 120 Muslims protested in Antwerp against the headscarf ban in the Royal Athenaeums of Antwerp and Hoboken.

They carried signs saying: “Everybody free, except us,” “Democracy, not discrimination” and “You are the oppressors, not us.” They demanded to rescind the headscarf ban by the two schools.

Parent Mina Cheeba said in a speech that the representatives of the parents in the school council haven’t heard of any social pressure to wear a headscarf and that if there are actual complaints, then they would like to take a look at them so they could come to a solution together.

Cheeba says the decision to ban the headscarf was made without asking the parents’ advice. The school regulations shouldn’t be changed autonomously, but by consultation with the parents.

Several students also expressed their displeasure. One said that they’re supposedly under pressure to wear a headscarf, but that’s nonsense. They are not feather-brains who accept everything without thinking.

Ayoub Aazzouti said that he’s fed up of the men being portrayed as machos who force girls to wear headscarves, because it’s not like that. “For us boys and girls are equal. We have a lot of respect for them and they are intelligent enough to decide on their own if they wear a headscarf or not. Stop using us as an excuse.”

On Monday about 40 Muslim women showed up to protest in front of the Royal Athenaeum of Hoboken. Some of the slogans included: “distressed by the lack of understanding”, “why a ban on my character”, and “lies in order to discriminate”.