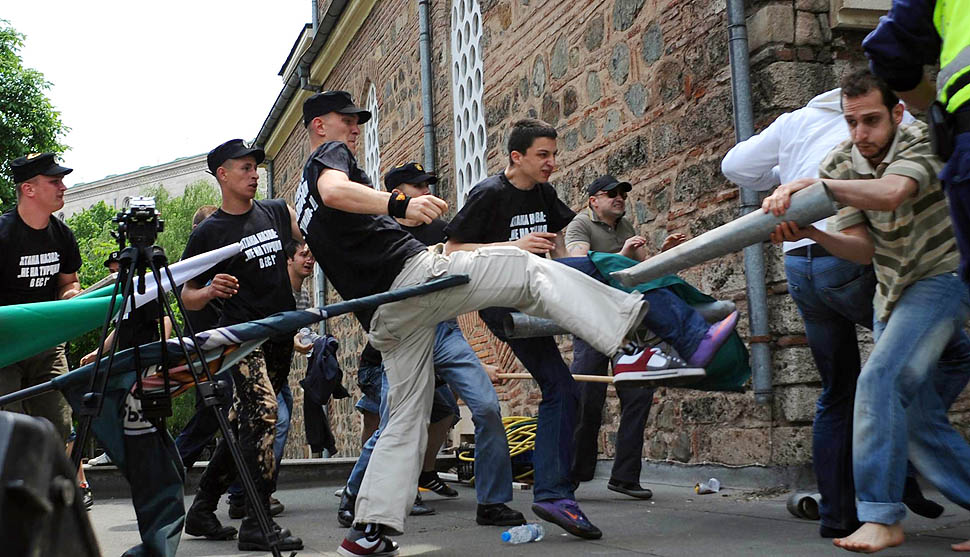 Ataka thugs assault worshippers at Sophia mosque in May 2011

Religious groups in Bulgaria complained that the government had failed to consistently enforce protection of religious freedoms, while abuses such as anti-Semitic incidents and vandalism of mosques and other places persisted, the United States state department noted in its annual religious freedom report.

Reports of intolerance by security services and local authorities continued, the state department report for 2013, released on July 29 2014 said. There were reports of societal abuses and discrimination based on religious affiliation, belief, or practice, the report said. “Discrimination, harassment, and general public intolerance of some religious groups remained a persistent problem. Anti-Semitic incidents and vandalism against mosques and places of worship persisted.”

A number of religious groups complained that the government did not consistently enforce legal and policy protections of religious freedom, the report said.

Jehovah’s Witnesses also reported harassment from the local police in Kyustendil, claiming that on November 21, about 20 police officers entered the Kingdom Hall during the congregation’s meeting and checked the identity cards of those present. The officers did not offer any explanation for their actions.

A trial in Pazardjik District Court of 13 Muslim leaders continued during the year. The defendants had been charged, in 2011, with participating in an illegal organisation; spreading anti-democratic, pro-Sharia ideology aimed at undermining the rule of law and basic human rights; and preaching intolerance and hatred of other religious groups during Friday sermons. The Chief Mufti’s office continued to maintain the innocence of the defendants and labelled the proceedings an attack on religious freedom.

In October the Sofia Regional Court told the prosecution service it needed to rewrite an indictment against six people. The individuals, including both Muslims and anti-Muslim protesters, had been charged in 2012 with hooliganism for their actions during the May 2011 assault by the protesters on Muslims attending Friday prayer in front of the Sofia mosque.

A number of small political parties made references to religion in controversial statements on political issues. For example, in October Magdalena Tasheva, a member of parliament from the Ataka party, referred to refugees as “a private Muslim army, trained for terrorist activities from camps along the Turkish-Syrian border.” The extreme nationalist party Internal Macedonian Revolutionary organisation continued to organise protests in front of the courthouse in Pazardjik against the wearing of religious attire and the propagation of Islam.

In May in response to a student’s 2012 complaint that she had been banned from attending school unless she stopped wearing a headscarf, the public Commission for Protection against Discrimination determined there had been no discrimination.

Some minority religious groups, including Mormons and the Jehovah’s Witnesses, continued to complain of discrimination and prejudice from local authorities in certain municipalities, despite obtaining national registration from the Sofia City Court. Contrary to the law, some municipalities reportedly said the groups had to register locally.

In February the Bourgas Municipal Council approved an amendment to the Ordinance for Preserving Public Order that prohibited door-to-door proselytizing and the distribution of religious literature. The Regional Governor of Bourgas stopped the implementation of the amendment; however, after a change of government, the new regional governor allowed its implementation in September. The Directorate for Religious Affairs protested against the restriction and advised the affected religious groups to consider legal action.

Although the statute of limitations for restitution cases expired in 2013, a number of claims from the Chief Mufti’s office remained outstanding. In September the deputy Chief Mufti reported there were 52 claims on 83 properties in the country, including 13 former mosques and a former Islamic school.

In March the National Assembly issued a unanimous declaration related to the 70th anniversary of the rescue of Bulgarian Jews and in tribute to the victims of the Holocaust, marking the first time Bulgaria’s legislature had expressed regret that Bulgarian authorities did not prevent the deportation of more than 11 000 Jews to death camps from regions under Bulgarian control during World War 2.

The local government in Gotse Delchev continued to ignore the Muslim community’s application for a permit to construct a mosque. The Kyustendil municipality continued to obstruct the building of a Jehovah’s Witnesses house of worship. The Sofia municipal government continued to withhold permission for building a second mosque in Sofia, even though the existing one was so small that worshippers had to pray outside on the sidewalk during Friday and holiday prayers.

Jewish organisations expressed concern over the government’s passivity in addressing hate crimes (particularly hate speech) and complained that website administrators no longer deleted anti-Semitic comments. Mormons reported several instances of harassment and physical assault of missionaries by young men in Bourgas, Pleven, and Stara Zagora. No charges have been filed.

Jehovah’s Witnesses continued to complain that media reports misrepresented their activities and beliefs, in particular reports by the ultranationalist SKAT TV cable company headquartered in Burgas. In January Jehovah’s Witnesses reported that the neighbours of a member of the Jehovah’s Witnesses living in Kazanluk threw stones at his home at the instigation of a local pastor.

In January vandals spray-painted graffiti on the Jehovah’s Witnesses Kingdom Hall in Varna. In May vandals spray-painted graffiti on the Mormons’ rented church building in Shoumen. In October vandals threw stones at the mosque in Kazanlak, breaking three windows. In November the Jewish community reported that vandals stole nine gravestones from the Jewish cemetery in Sofia. Jewish community leaders continued to express concern over increasing incidents of anti-Semitism in social media and online forums.

In June Jewish groups reported that ultranationalists used an anti-Semitic image of an older man in a beret, a stereotype of an older Jewish man, in anti-LGBT Pride posters placed around Sofia that featured the slogan, “To keep children from obscenity.”

In November media commentators noted that the founding of a new political party, the Nationalist Party of Bulgaria, had come on the eve of the 75th anniversary of Kristallnacht. Jewish organisations viewed this new party as a threat because of the date it was founded and its xenophobic statements.

Social media users accused a prominent American of ordering the antigovernment protests that began in June, alleging that he had financed the nongovernmental organisations that had been active in the protests, while making frequent references to his Jewish heritage.

In July rap artist Mihail Mihailov (“Misho the Slap”) criticised the former finance minister in a live television interview, calling him “Jewish vermin.” There was no immediate reaction from the interviewing reporter, nor was there a response from the government condemning this incident. Mihailov said in a subsequent apology that his comment was a cliche.

In February nearly 1000 people marched in central Sofia in a rally, organised by the far-right Bulgarian National Union, to honor Hristo Lukov, a World War 2 general known for his anti-Semitic views and pro-Nazi activities. There were no reports of overt expressions of anti-Semitism at the rally, the US State Department report said.