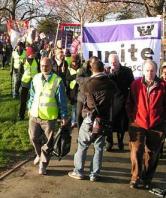 An attempt by the fascist British National Party (BNP) to hold a racist rally in Dagenham, east London, ended in its humiliation last Saturday.

Despite extensive leafleting in the borough, the Nazis only managed to attract around 70 people to their rally – and they were surrounded by over 400 anti-fascist protesters chanting slogans and jeering at them.

Richard Barnbrook, the leader of the BNP’s 12-strong council group in Barking & Dagenham, struggled to make himself heard to the small crowd gathered in a car park near Dagenham civic centre. His words were drowned out by the chorus of anger and derision from anti-fascists. The BNP supporters eventually filed away, visibly downcast and uncomfortable.