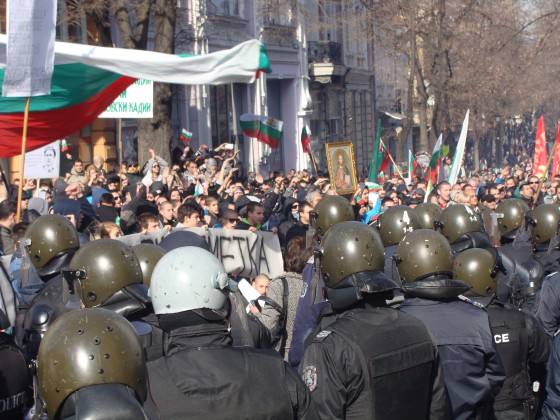 Hurling paving stones, rocks and fireworks, a large mob of protesters – many of them from football fan clubs – smashed windows of Plovdiv’s historic Dzhumaya Mosque in the centre of Bulgaria’s second city.

The February 14 protest was the latest in a series against court applications by the office of the Chief Mufti, spiritual leader of Bulgaria’s Muslims, for properties historically owned by the Muslim community. The court applications have been lodged under the country’s Religious Denominations Act, which makes provision for such applications by all officially recognised religious groups in Bulgaria.

A large cordon of police in riot gear stood between the crowd and the mosque building, which also features a recently-reopened cafe offering Turkish delicacies, but the missiles were hurled over the heads of the police.

While the crowd were at the mosque, each blast of a firecracker or sound of breaking glass was greeted by cheers from the mob. After the smashing of windows, police began to attempt to move the crowd, unofficially estimated at 2000 people, back. During this engagement, three people were injured and one arrested.

Reporters at the scene said that at the Turkish consulate, which is some distance away adjoining Plovdiv’s city park, demonstrators shouted, “you are not Europeans, you are barbarians”. Demonstrators also marched in the direction of the city headquarters of the Movement for Rights and Freedoms, the party led and supported in the main by Bulgarians of ethnic Turkish descent, saying that they wanted to occupy the building. Demonstrators chanted “freedom or death” and “down with the MRF”.

Bulgarian-language news website Plovdiv24.com has video of the mosque incident.

According to the February 2011 census in Bulgaria, just less than eight per cent of the country’s total population of about 7.3 million are Muslims.

Muslim and Turkish symbols are a preferred target for hatred among ultra-nationalist groups in Bulgaria, who invoke the five centuries of Ottoman rule and claim a supposed plot to “Islamicise” modern Bulgaria. For ultra-nationalist parties such as Ataka, campaigning against Turkey’s possible entry into the EU, against official Bulgarian government policy, is a signature issue.

Muslims also were targeted by far-right and ultra-nationalist groups in 2013 when there was a notable increase in refugees in Bulgaria from the Middle East and North Africa, mainly because of the Syria crisis.

Human rights watchdogs have reported isolated instances in previous years of desecration of mosques and alleged harassment of some Muslims by security services.