The Daily Telegraph reports that far-right anti-Islamic groups from across Europe, led by the English Defence League, will be holding a rally in Aarhus on 31 March under the auspices of the EDL-sponsored European Freedom Initiative. Swedish Defence League spokesman Isak Nygren states: “There will be speeches from every defence league in Europe. I hope we can show that there’s resistance against Islamisation of Europe, that we can inspire each other.”

EDL leader Stephen Lennon describes the Aarhus rally as their “first proper European event” – the EDL’s previous attempt at a protest outside the UK, in Amsterdam in October 2010, having been a bit of a disaster. Lennon told the Telegraph: “We are hoping this will be the launch of a wider European Defence League. We don’t expect it to be big, but our first event wasn’t that big, and they’re just going to get bigger and bigger.”

Nottingham University expert of far-right movements Matthew Goodwin is quoted as saying: “It shows us something that I don’t think British commentators have grasped, which is that elsewhere in Europe, the EDL is seen as being quite a significant movement,” he said. “When you look at guys like Anders Breivik and the Danish Defence League, we can see how groups in Europe are looking at Britain and the EDL as a model.”

Weyman Bennet of Unite Against Fascism said: “Everywhere they’ve called a demonstration there’s been violence. Across Europe, the Sweden Democrats and the Danish People’s Party, all of them are growing by using this rhetoric. We see them as a group of people who will try and encourage fascist politics. They’ve simply swapped anti-semitism for anti-Islam.”

Meanwhile, I notice that the European Freedom Initiative is welcoming support from Tehmina Kazi of British Muslims for Secular Democracy for the anti-sharia bill promoted by Geert Wilders’ admirer Baroness Cox. Perhaps BMSD should consider forming an alliance with the EDL? 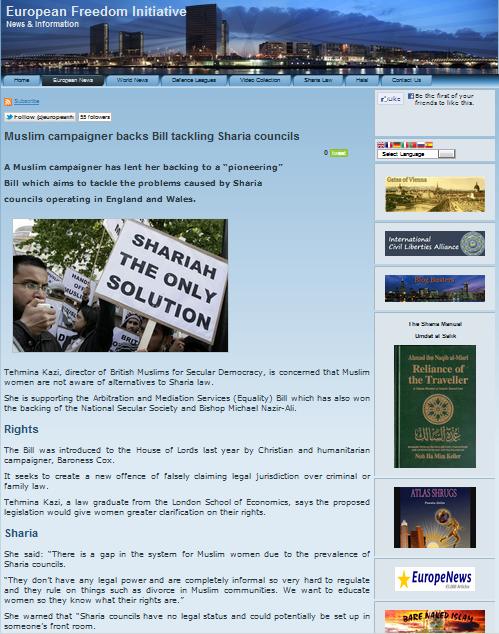