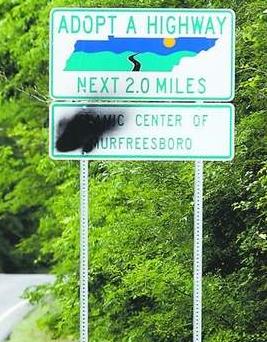 Islamic Center of Murfreesboro volunteers who pick up trash on Bradyville Pike encountered something they can’t clean – black spray paint on their adopt a highway sign.

The culprit covered up the word Islamic on the ICM sign near mile marker 26 on a portion of state Route 99 southeast of Murfreesboro.

The act of vandalism is the latest in a string of vandalism directed at the congregation and its plans to build a new mosque on Veals Road, which is off Bradyville Pike. In January 2010, a vandal spray painted “Not Welcome” on the congregation’s sign announcing its future site. Another sign on the site was later broken in half and someone torched construction equipment on the site last summer.

To make a difference in the community, the ICM entered into a contract with the Tennessee Department of Transportation to volunteer four times this year to clean up two miles of Bradyville Pike between mile markers 24 and 26, said ICM member Ihsan Ansari. He led a group of seven members in early April in cleaning trash from the road and its ditches even before the state, at no cost to the Muslim congregation, erected a pair of signs acknowledging that the ICM adopted this portion of the highway.

Ansari was upset to learn on Friday that one of the adopt a highway signs had been vandalized. “It shows there are people who are ignorant of what Islam is,” Ansari said. “They just have hatred in their blood. They have hatred for Islam. It doesn’t deter me from doing any more volunteer service. I definitely will plan another pick-up event. Hopefully, the sign will be replaced. Hopefully, their outlook can be broadened and opened up.”