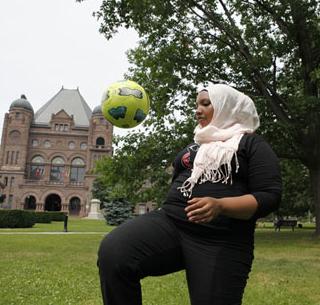 A group of Montreal women gathered Thursday to protest a Quebec soccer association’s decision to sack a referee because she wears a hijab. The protestors also called for the end of a controversial policy that bans headscarfs during soccer games.

The demonstraters – who played a pickup game near Montreal’s old port – said the association’s position is unacceptable.

Headscarfs are also banned by the Fédération Internationale de Football Association, which governs international soccer. “We’re asking FIFA and any other organizations to get out of women’s wardrobes,” said Sana Saeed, who organized the protest.

Saeed was one of about a dozen women who wore hijabs Thursday afternoon as they played soccer to protest the firing of Sarah Benkirane – a 15-year old who officiated soccer games for two years in the West Island area of Montreal, and off island in Vaudreuil.

They also held their protest to show that it is possible to play soccer safely while wearing a headscarf. FIFA bans the hijab on the field saying it restricts a player’s breathing.

Naajia Isa, who has played soccer in Singapore where she said the hijab is more widely accepted, disagrees. “They don’t look at you and see the headscarf … they see a student, a mother, a daughter,” said Isa.

It was The Lac St. Louis Regional Soccer Association that fired Benkirane in June. At the time, it said it follows FIFA rules and won’t reverse its decision on hijabs.

The province’s soccer federation said Tuesday that Canada’s parallel organization also follows the FIFA rule prohibiting the hijab, and to change the rules, Benkirane would have to address the world soccer association.

In February 2007, five teams from across Canada walked out of a soccer tournament in Laval, Que., because a Muslim girl was ejected for wearing a hijab. FIFA upheld its rule banning the hijab the following week.