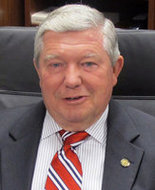 Laird, of Roanoke in east Alabama, announced Monday that he was becoming an independent. On Friday, Democratic leaders rebuked Laird for sending an offensive email to legislators and constituents prior to his party switch.

The message contained a picture of President Obama kissing Democratic U.S. Rep. Nancy Pelosi on the cheek, with a caption that read “the only time you’ll see a Muslim kiss a pig.”