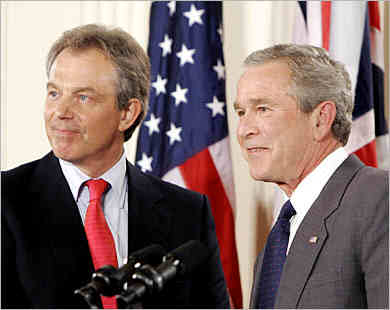 Tony Blair, interviewed by John Humphrys on this morning’s Radio 4 Today programme, explains that the “war on terror” is not just against al-Qaeda but against all forms of “radical Islamism”.

He poses the rhetorical question about 9/11: “was this a group of isolated people, terrorists, with an ideology, who committed a terrible atrocity or was this group at the furthest end of a spectrum of what I would call radical Islamism, and therefore this is something far bigger, far greater than even we assessed after September 11?”

Blair opts firmly for the latter: “It’s not just about a movement prepared to use terror. The ideology, the narrative that gives rise to this is far deeper and far broader. When I’m in the Middle East now and you see for example the activities of the Muslim Brotherhood, or Hamas, you look at the role that Iran is playing in the region, I think it’s a big mistake to say this was just about Bin Laden and a group of terrorists.”