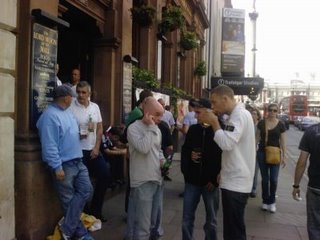 Over at his Lionheart blog, Paul Ray relates the sad tale of the mass anti-Muslim demo that wasn’t. It seems that one Dave Shaw had summoned like-minded patriots to join an “anti-extremist protest through the heart of Londonistan” last Saturday.

Alas, it was not to be. Members of Ray’s grandly titled English and Welsh Defence League turned up at the appointed meeting place for the demonstration, outside a pub at Trafalgar Square (see picture), only to find that they were the sole participants at the event.

According to Paul Ray: “With a no-show from ‘Dave Shaw’ and his group members, who all said they were going to be turning up on the day to protest for the sake of their country, no one really knew what we should do next, or where we should go to protest because it was not our organised event. After a few conversations it was decided that we would travel to Whitechapel and protest outside the East London Mosque, and take some group photographs.”

Unfortunately, backward elements within the English and Welsh Defence League proved inadequate to the task. As Ray recounts indignantly:

“At this point sadly, there were deserters amongst the ranks, who chose to entertain themselves in Covent Garden rather than sticking in the ranks with their brothers, and entering enemy territory with the rest of us, as part of the group who had travelled in to protest against Islamic extremists for the sake of their country.

“Desertion is one of the very worst forms of betrayal in the armed forces, with a prison sentence for those who choose to take that path and if we look back to the First World War, deserters were shot for their betrayal against their countrymen.”

So poor Paul Ray was left to march through the East End with what appears to be about a dozen of his mates.