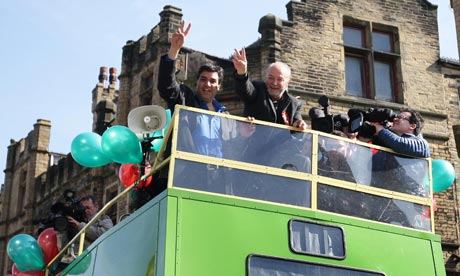 That is the headline to Andrew Gilligan’s report for the Daily Telegraph on George Galloway’s stunning victory in the Bradford West by-election.

Predictably, Gilligan presents his readers with the familiar right-wing narrative about Galloway’s campaign being based on a communalist appeal to Muslim voters. This was, Gilligan asserts, “the first election for a generation or more so nakedly fought through the invocation of race and faith”.

Given that Muslims make up only 38% of the electorate in Bradford West, you might wonder how Galloway managed to gain 56% of the vote on that basis. Indeed, as Gilligan himself concedes, Galloway “won across the seat, in the mixed and mainly white wards of Thornton & Allerton, Heaton, and Clayton & Fairweather Green as well as in the inner-city wards”. In other words, far from running a sectarian campaign that pitted Muslims against non-Muslims, Galloway managed to unite voters from all communities behind his candidacy.

But then, as the Hutton Inquiry found many years ago, Gilligan’s malicious and biased journalism has never had more than the most distant relationship with the facts.

Postscript:  To be fair to Gilligan, however, even he balks at descending to the level of the terrorism-supporting Zionist blog Harry’s Place, which on election day posted a photo of a crudely photocopied leaflet (“I, George Galloway, do not drink alcohol and never have”) which they portrayed as a piece of official campaign literature distributed by Galloway himself.

The photo of the leaflet was accompanied by a frothing-at-the-mouth denunciation of Galloway by Hasan Afzal of British Muslims for Israel (an organisation which has one known member – Hasan Afzal). It began: “In what must be the most disgusting use of ethnic-religious-race baiting in recent times, the campaign team of George Galloway’s soon to be failed bid to take Bradford West has published this piece of literature for the Muslims of Bradford West whom, with other voting-age citizens, go to the polls today.”

Gilligan, however, feels obliged to point out: “The leaflet contains no official logo of Mr Galloway’s Respect party, or the names of an agent or printer, as required by electoral law; Mr Galloway denies that it came from him.”