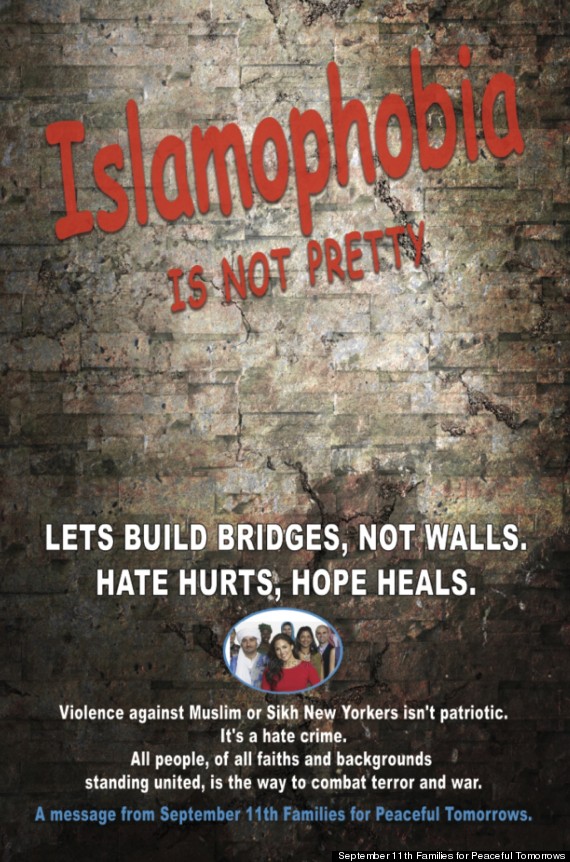 Sponsored by September 11th Families for Peaceful Tomorrows, the ad’s launch coincides with a symposium on gun violence and hate crimes taking place on September 6 in New York City. The symposium will encourage dialogue between panelists and audience members with the intention of discussing solutions to religious intolerance.

“We wanted to make a clear statement that our 9/11 family members do not want to promote fear and hatred in our names,” Peaceful Tomorrows Project Director Terry Greene, whose brother died aboard United Flight 93, told HuffPost. “We believe that unity and interfaith tolerance are the path forward to a more peaceful tomorrow.”

A poll conducted by the Arab American Institute from 2010 to 2014 looked at American attitudes toward Arabs and Muslims and found that unfavorable feelings toward these groups have increased in recent years. Forty-five percent of Americans polled said they viewed Muslims unfavorably – though only 47 percent said they personally knew someone who was Muslim.

Although hate crimes targeting Asian Pacific Americans, Arab Americans, Muslims, Sikhs and others spiked after September 11, Greene said, the campaign aims to respond specifically to recent attacks on Sikhs in New York City. “The civil liberties of all Americans are threatened,” Greene said.

“By developing and advocating nonviolent options and actions in the pursuit of justice, we hope to break the cycles of violence engendered by war and terrorism,” the organization said in a press release.

The Borough of Manhattan also declared September 6 the September Eleventh Families for Peaceful Tomorrows Appreciations Day, Greene told HuffPost. “We want to honor our loved ones by preventing other innocent civilians from dying needlessly,” Greene said.