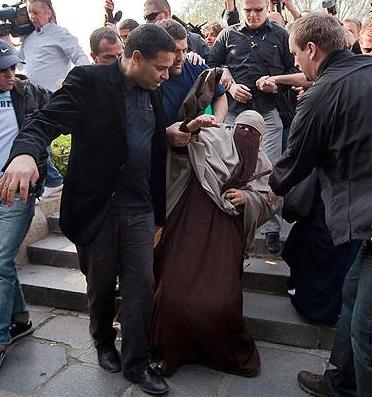 One year after France introduced a law banning women from wearing full-face veils in public, officials report that around 300 have been  reported.

The ban on wearing the niqab in any public place was introduced on April 11th 2011. It is illegal for any woman to wear the veil except when they are at home, worshipping in a religious place or travelling as a passenger in a private car. Wearing the veil can lead to a fine of €150 ($200) and forced attendance at a citizenship class.

Interior ministry officials reported that “in one year there have been 354 police checks and 299  reports made,” reported Le Parisien newspaper.

At the time of the law being passed, officials estimated that around 2,000 women were wearing the full-face veil. In January, interior minister Claude Guéant told parliament that “the number of women wearing the veil has fallen by half” since the law was introduced.

Rachid Nekkaz of the group “Touche pas à ma Constitution” (Don’t Touch My Constitution) claims that 367 women have been questioned in police stations for “between one and a half and three hours.” Two-thirds of the women questioned are divorced or single, according to Nekkaz. He believes this proves the women are not wearing the veil “by force of a husband.”

Update:  I should know better than to rely on The Local’s French news section. The 299 figure is for women who have been reported for breaking the veil law. RFI says that so far only about 20 have actually been fined.