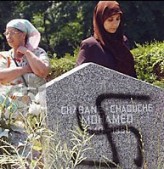 “In 2006, discrimination and violence against Muslims persisted throughout much of Europe. Though the number of registered incidents decreased from a peak level in 2005, after the subway bombings in London, the number of violent incidents remains high.

“In Belgium, in May, an anti-immigrant fanatic murdered a pregnant Malian au pair, and the two-year-old Belgian infant in her charge. Shortly before, he had shot and seriously wounded a woman of Turkish origin wearing a Muslim headscarf, as she sat on a bench reading. In Poland, in July, at least four men attacked a Moroccan actor at an antiracism festival in the northern city of Olsztyn, hitting him over the head with a bottle and stabbing him repeatedly, leaving him in critical condition. Both cases illustrate the double discrimination of racism and religious intolerance so frequently evident in attacks against Muslims.

“Other recent incidents have included bombings and arson attacks on mosques and Muslim institutions in many countries, including Austria, France, the Netherlands, Spain, Russia, and the United Kingdom, with attacks on Muslim cemeteries also widely reported. Assaults on individuals ranged from spitting, shoving, or the snatching of women’s headscarves, to punches and kicks and lethal bludgeoning, stabbings, and shootings. Personal assaults were often accompanied by shouted insults alluding to religion and ethnic or national origin – sometimes expressing both racism and religious hatred….

“The perpetrators included members of organized extremist movements, racist youth cultures, and ordinary people acting in a climate of xenophobia and nationalist chauvinism. In western Europe, anti-Muslim violence was driven by fears of Islamist terrorism and newly mainstream trends to present immigration and Muslim minorities as a threat to national identity.”