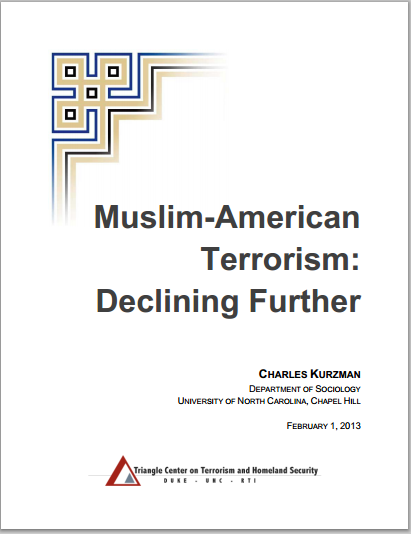 Try as al-Qaida might to encourage them, American Muslims still aren’t committing acts of terrorism. Only 14 people out of a population of millions were indicted for their involvement in violent terrorist plots in 2012, a decline from 2011’s 21. The plots themselves hit the single digits last year.

So much for a widespread stereotype. According to data tracked by the Triangle Center on Terrorism and Homeland Security in North Carolina and released Friday (.PDF), there were nine terrorist plots involving American Muslims in 2012. Only one of them, the attempted bombing of a Social Security office in Arizona, actually led to any violence. There were no casualties in that or any other incident. And the Triangle study tracksindictments, not convictions.

Terrorist incidents from American Muslims is on the decline for the third straight year. After an uptick in 2009, there were 18 plots in 2011 involving 21 U.S. Muslims. And it’s not just violent plots: Fewer Muslim-Americans are getting indicted for money laundering, material support for terrorism, and lying to investigators. There were 27 people indicted on those terror-support charges in 2010, eight in 2011 and six in 2012.

“Online, there’s all sorts of radical material out there – exhortations to violence, [instructions], and yet despite it being out there, so few people are taking it up,” University of North Carolina sociologist Charles Kurzman tells Danger Room. Kurzman’s research has been the driving force behind the Triangle study for the past four years. “From the democratization of the means of violence, accelerated by the internet, we might expect to see more violence and, fortunately, we haven’t.”

Since 9/11, Kurzman and his team tallies, 33 Americans have died as a result of terrorism launched by their Muslim neighbors. During that period, 180,000 Americans were murdered for reasons unrelated to terrorism. In just the past year, the mass shootings that have captivated America’s attention killed 66 Americans, “twice as many fatalities as from Muslim-American terrorism in all 11 years since 9/11,” notes Kurzman’s team. 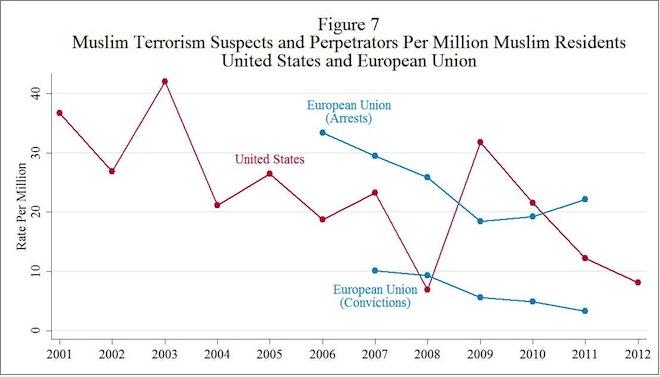 The sample of Muslim Americans turning to terror is “vanishingly small,” Kurzman tells Danger Room. Measuring the U.S. Muslim population is a famously inexact science, since census data don’t track religion, but rather “country of origin,” which researchers attempt to use as a proxy. There are somewhere between 1.7 million and seven million American Muslims, by most estimates, and Kurzman says he operates off a model that presumes the lower end, a bit over 2 million. That’s less a rate of involvement in terrorism of less than 10 per million, down from a 2003 high of 40 per million, as detailed in the chart above.

Yet the scrutiny by law enforcement and homeland security on American Muslims has not similarly abated. The FBI tracks “geomaps” of areas where Muslims live and work, regardless of their involvement in any crime. The Patriot Act and other post-9/11 restrictions on government surveillance remain in place. The Department of Homeland Security just celebrated its 10th anniversary. In 2011, President Obama ordered the entire federal national-security apparatus to get rid of counterterrorism training material that instructed agents to focus on Islam itself, rather than specific terrorist groups.