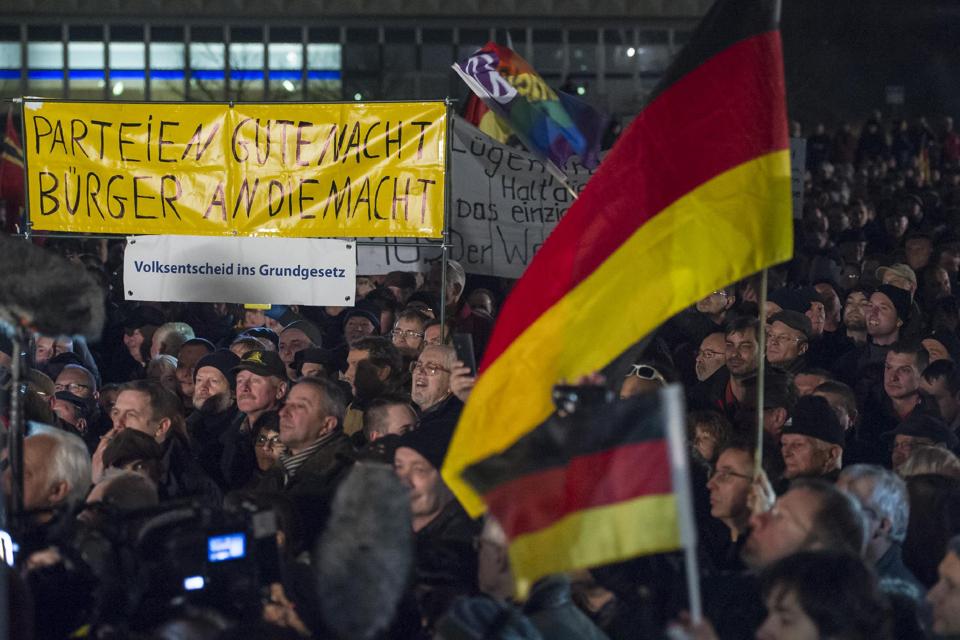 A record 15,000 people marched Monday in eastern Germany against “asylum cheats” and the country’s “Islamisation” in the latest show of strength of a growing far-right populist movement.

Chancellor Angela Merkel earlier cautioned Germans against falling prey to xenophobic “rabble-rousing”, reacting to the nascent movement called “Patriotic Europeans Against the Islamisation of the Occident” or PEGIDA.

“The people are with us!,” the group’s founder Lutz Bachmann shouted at the crowd, celebrating a 50-percent rise in attendance since their last “Monday demonstration” in a series of rallies that started only in October.

“Everywhere now, in every news rag, on every senseless talkshow, they are debating, and the most important thing is: the politicians can no longer ignore us!” Bachmann told the mass of people, many waving the black-red-gold national flag.

“We have shown by taking another ‘little stroll’, and by growing in numbers, that we’re on the right path, and that slowly, very slowly, something is beginning to change in this country,” Bachmann bellowed to loud cheers.

Since the protests have rapidly grown in size and spawned smaller clones in half a dozen cities, a debate about immigration and refugees has gripped Germany, a country whose Nazi past makes expressions of xenophobia especially troubling.

Politicians have been stunned by the emergence in the city of Dresden of the nationalists who march against what they consider a broken immigration and asylum system and who vent deep anger at the political class and mainstream media.

The demonstrations have flared at a time when Germany, Europe’s biggest economy, has become the continent’s top destination for asylum seekers, and the world’s number two destination for migrants after the United States. The influx of refugees from Syria, Iraq, Afghanistan and several African and Balkan countries has strained local governments, which have scrambled to house the newcomers in old schools, office blocks and army barracks.

One demonstrator, Michael Stuerzenberger, said he does not oppose asylum for refugees but asserted that “70 percent of people claiming political asylum here are economic refugees. We don’t want to stay silent about this anymore. We don’t want a flood of asylum seekers, we don’t want Islamisation. We want to keep our country with our values. Is that so terrible? Does that make us Nazis? Is it a crime to be a patriot?”

While several known neo-Nazis have been spotted in the PEGIDA crowds, the rallies have been dominated not by jackbooted men with shorn heads but by disenchanted citizens who voice a string of grievances. “We are the people,” they chanted, co-opting the phrase famously shouted a quarter-century ago by East German pro-democracy protesters here in the lead-up to the fall of the Berlin Wall.

Justice Minister Heiko Maas said the marches “bring shame” on the country, and that Germany is experiencing an “escalation of agitation against immigrants and refugees”, a trend he labelled “repugnant and abhorrent”.

The leader of the Central Council of Muslims in Germany, Aiman Mazyek, warned that PEGIDA could split German society and that their use of the chant “we are the people” sought to divide “you, the bad Muslims, and us, the good Germans”. Speaking with AFP, he also blamed politicians and the media for mainly speaking about Islam and Muslims “in the context of security, threats and danger” in recent years.

More than 1,200 police kept a close watch on the non-violent crowd and on about 6,000 counter-protesters nearby marching under the banners “Dresden Nazi-free” and “Dresden for All”, organised by civic, political and church groups.

Most protesters claimed they are not neo-Nazis, just patriots. “To call these people sick with fear, Islamophobic, is outrageous,” said an Austrian protester, Lana Gabriel, in her 40s. “They are not far-right. They just love the country and its traditions.”

Several conservative politicians have argued the government must “listen” to the people’s concerns about immigration, while the small anti-euro AfD party has openly sympathised with PEGIDA, saying its message has struck a chord. Polls suggest the eurosceptic party has found a new campaign issue.

A survey for news website Zeit Online showed that nearly half of all Germans – 49 percent – sympathised with PEGIDA’s stated concerns and 30 percent indicated they “fully” backed the protests’ aims. Almost three in four – 73 percent – said they worried that “radical Islam” was gaining ground and 59 percent said Germany accepted too many asylum seekers. 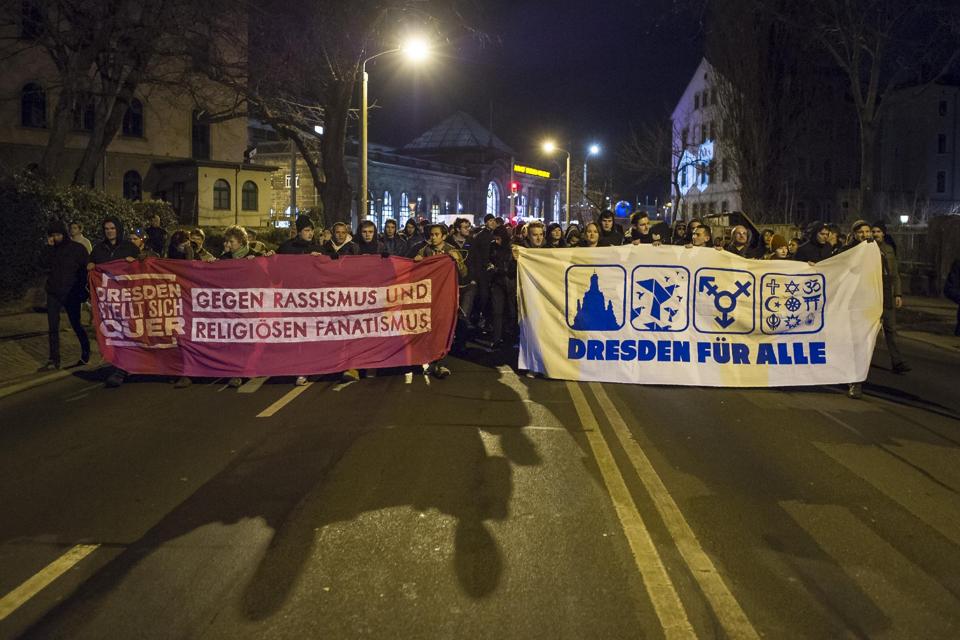